What I know now… About Infant Sleep

When our first baby arrived in my family, we almost couldn’t believe it when he slept for a 5 hour stretch at just 3 weeks old. We’d heard all the sleep-deprivation, nightmare stories from our friends who assured us that a good night’s sleep would be a distant memory for at least 6 months. Of course, he didn’t always sleep 5 hours at a time, which we found out the next night, but he was generally a very good sleeper. We reveled in our new parenting prowess!

Then… along came our second baby boy… This little one had the most erratic sleeping patterns (or so we thought- he actually had no pattern at all). What were we doing wrong? Why didn’t he sleep like his brother? Now it’s many (MANY) years later, and since working with postpartum families for 2 years as the Director’s Assistant in the office, I’ve learned that our first was the exception, and his brother was much more typical.

Have you ever heard of “circadian rhythms”? Well, they are what the body and brain develop to regulate temperature, wakefulness and sleep. We are not born with them. They develop over the first 16+ weeks of a new baby’s life, and of course the sleep rhythms develop last. So what can you do as new parents to help? Studies show that the sleep circadian rhythms can be influenced by exposure to light and dark. Creating a nightly routine will help your baby create melatonin during the night, which will help her sleep for longer stretches. It can take several weeks to achieve stretches longer than two or three hours, and it will vary from infant to infant (and if you have multiples, they are VERY UNLIKELY to develop the same pattern!). 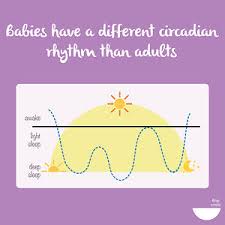 And guess what? Newborn babies will sleep up to 20 hours in a day. But if they’re not sleeping longer than 2 hours at a time, doesn’t that mean they’ll wake up oh, about 100 times??? Yes. Yes, it does. Guess what else? At 4 months, they undergo one of their biggest growth and developmental spurts. So what you’re saying is just when those rhythm things are getting started, baby is going to stop sleeping well again??? Yes. Yes, that’s what I’m saying. It’s almost unfair, isn’t it? And believe me, you’re not alone in feeling frustrated.

As the scheduler at Welcome Baby Care, I talk to parents all the time about this. Now, I’m not a trained doula, or even a professional infant caregiver. I’ve learned all this from our staff and from reading articles and studies. You bet I wish I’d known it when my boys were babies! Which is why I’m telling you. You don’t have to be a professional to know how it’s done, but it definitely helps to know why it’s so different for different babies! You’re not doing it wrong- babies have been developing this way since forever. If you need help getting enough sleep some nights, work out a trade off with your spouse/partner. Ask a friend or relative to stay the night once in a while. Or call me. I get it, I’ve been there, and I will work hard to help you get sleep you need!